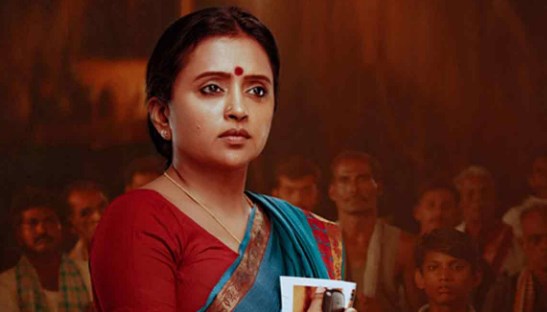 Jayamma Panchayathi Movie Review: Suma Kanakala is a well-known and successful television Achor in the Telugu film industry. She had been doing quite well in her profession until she abruptly changed her mind and decided to star in a feature film as the main character. Suma has appeared in several feature films in the past, but this time she is set to make a name for herself with the film Jayamma Panchaithi, which was released today, May 06, 2022. There are two other films that have also been released: Vishwak Sen’s Ashoka Vanamlo Arjuna Kalyanam and Bhala Thandanana. Let’s see how the film fared in this titanic battle and whether it’s worth watching or not.

Suma Kanakaala is known for her hyperactive anchoring, but Jayamma’s character is the polar opposite; we should thank director Vijay Kumar Kalivarapu first and foremost for casting her in such a calm and composed role.
The film is set in a village, and it begins well, with the director taking his time to establish all of the characters. The audience will be engaged throughout the film because the characters and story are so relatable that many people believe it is taking place in our village. The comedy and rural emotions blended well.
The conflict in Jayamma Panchayathi isn’t particularly exciting; it appears to be quite simple, but it is related to her husband’s illness. The conflict, on the other hand, could have been handled better. The first half is enjoyable, with some lovely comedy and Village Council scenes, but the second half is emotional and feels rushed.
When it comes to performances, Jayamma is the show’s star. Suma Kanakala’s portrayal of Jayamma was flawless; as a naturally active person, she embodied Jayamma’s character effortlessly. Devi Prasad was fantastic as Jayamma’s husband, and the rest of the cast was fantastic as well.
In terms of technique, debut director Vijay Kumar Kalivarapu’s writing appears to be very mature, as he handled the film admirably and captivated the audience. More than directing, he has written a good story, as Jayamma Panchayithi is about cast issues and so-called elders’ honor issues as well as Jayamma’s life. The layers, on the other hand, did not blend well.
Despite the fact that the film was made on a shoestring budget, Anush Kumar’s cinematography is quite good, and his visuals make the film appear rich and quality. One of the film’s major highlights is the legendary music director M.M Keeravaani, who can do any genre and leave his mark with his music, and he provided a wonderful background score for Jayamma Panchayathi. In terms of the film requirement, the rest of the departments performed admirably.
Finally, Jayamma Panchaythi is an absolute must-see; go in with no expectations and you will be pleasantly surprised.